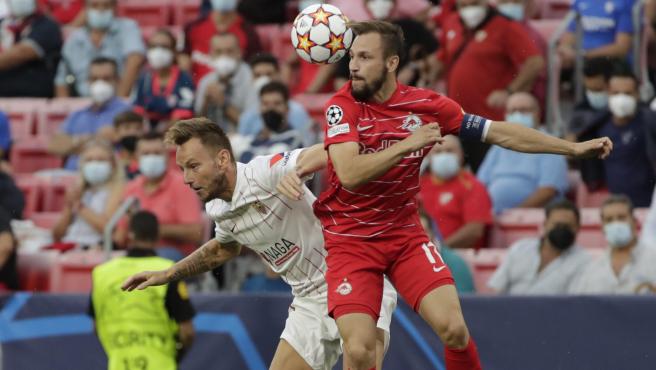 Sevilla returned to the Champions League in front of a stage adorned by the increase in fans in the stands, but still far from the great football nights that have been seen at the Sánchez-Pizjuán. After a first part of heart attack, in which four penalties were thrown, three against the people of Seville, the boys from Lopetegui saved a point in a match that Salzburg could win before the break.

Salzburg started the match without the complexities that a team full of young players could have and led by a coach, Matthias Jaissle, who seven months before making his debut against Sevilla in the Champions League, he was in command of the youth squad. The high pressure suffocated a Sevilla that with a good combinatorial game made some occasions between the gaps left by the defense of the Austrian team.

However, the party it took 13 minutes to become a nightmare for Lopetegui, Well, a penalty on the line caused by Diego Carlos gave the first chance from 11 meters to Salzburg, which was missed by Adeyemi with a shot that went brushing the left stick, masterfully covered by Bond.

The first scare seemed to enliven the Sevilla team, which continued trying, not without difficulties, to sneak among the few holes left behind by the Austrian team. However, when it seemed that the team could resurface supported by his swollen, Navas gave another penalty to Salzburg with a mistake not typical of a player of his experience. The rival did not forgive and went ahead in an increasingly complicated match for the Spanish team.

Since Navas’ error, a totally knocked out Sevilla lost their passing precision, their idea of ​​the game was diluted and the visitors strengthened their defensive rigidity. After a few minutes of agony, when it seemed that the team began to breathe on the field, a bad start by Bono gave away the third penalty in just 35 minutes of play, which to the relief of a totally outmatched team ended up crashing into the wood Sucic, the scorer in the second.

In a match in which the maximum penalty was charged cheaply, Sevilla also had their opportunity in an isolated play in which En-Nesyri was shot down by former Sevilla player Wober, to be charged by the VAR seconds after the referee discarded the infraction. Rakitic made it 1-1 before Sevilla retired to a break they were crying out for from the first penalty against.

The start of the second half was not much better for Lopetegui’s men, as they began as they went to the locker room: without ideas, imprecise in the pass and receiving clear chances that the young team led by Jaissle did not know how to materialize. On one of those nights to forget, the game could still get more uphill for Sevilla, and so it was after a play in which the penalty returned to be the protagonist, or at least the absence of it in a play in which En-Nesiry received the second yellow card for simulation.

If the match was difficult for Sevilla, with one player less the forecast was not much better. However, with the passing of the minutes and the remodeling of the eleven with the entry of Ocampos, Delaney and later Lamela, Rafa Mir and Montiel the locals managed to alleviate the suffering behind and begin to build attacking chances. The Austrians arrived less frequently and the Sevilla attack began to bother the rival goal, with a shot that even raised the stands.

At the final whistle, after a six-minute discount in which neither of them managed to impose their game in a completely broken match, Sevilla closed their debut in this edition of the Champions League with a shock that Rakitic himself defined as “rare”. The Seville club began its journey in the top European competition far from last season’s version, in which it said goodbye to Europe in a tight round of 16 game that resolved Haaland’s punch.