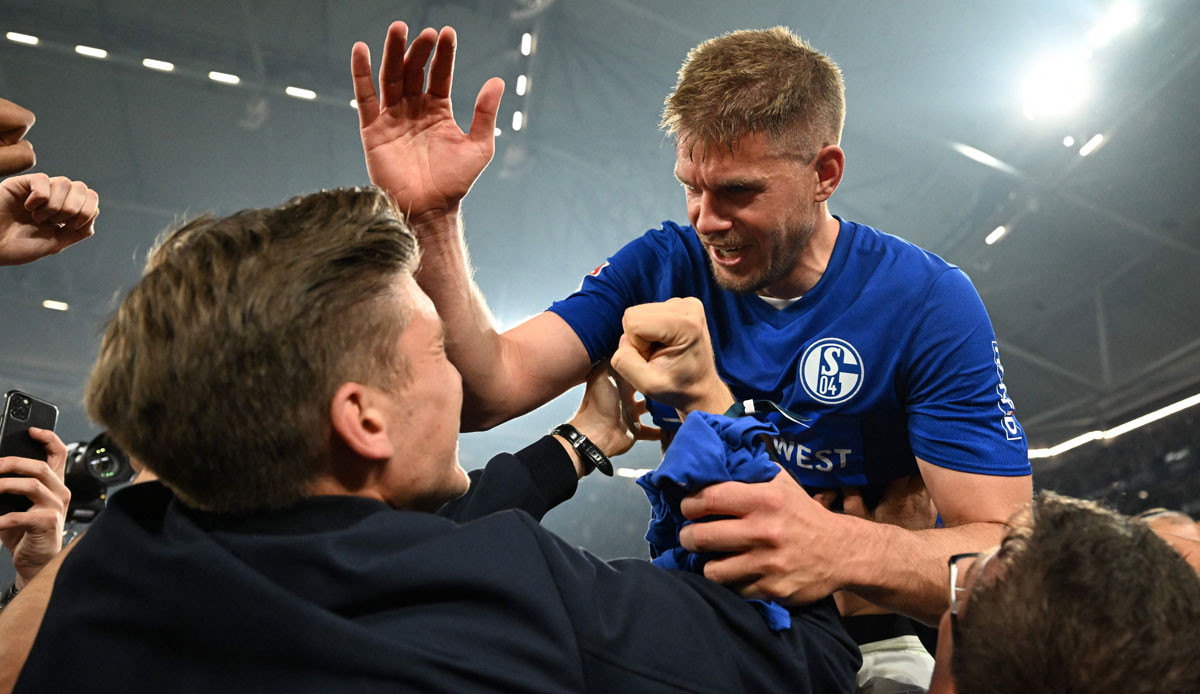 Not only Bundesliga returnees Schalke 04, but also other traditional clubs are currently experiencing a renaissance and are hoping for promotion. Fans, officials and the media are happy about this. But there is also a downside to the coin. The Soccer Column.

Curtain up for the (penultimate) round: On the 34th matchday there are still two places left when it comes to the question of what the Bundesliga will look like next season – and five teams in the draw.

After Greuther Fürth, seventeenth-placed Arminia Bielefeld was actually relegated to relegation rank 16 due to three points and seven goals behind, the decision was made between VfB Stuttgart (30 points, home game against Cologne) and Hertha BSC (33 points, but the worse goal difference, away in Dortmund).

Felix Magath, brought in as a rescuer, has never been relegated as a coach from the Bundesliga, but this time it could be so far. In the past two matchdays, the Berliners were within reach twice of relegation and then lost it both in Bielefeld (1: 1) and against Mainz (1: 2). Therefore, veteran Friedhelm Funkel now sees the rival in a better position.

“Hertha has an incredibly experienced coach on the sidelines, and we’ve seen what Felix Magath has done in a very short time with this squad, which previously offered very little,” he said table football. “But the momentum is clearly on the Stuttgart side.”

Funkel: “Momentum clear on the Stuttgart side”

After all, the loser of the long-distance duel can still avoid relegation via relegation, which the old fox Magath had allegedly planned from the beginning. “As a professional who I consider myself to be, I’m preparing for the worst-case scenario,” said the 68-year-old.

And this worst case could now occur against his former club HSV, with whom Magath once won the European Cup and two championships: “That was my feeling from the start. The closer you get to it, the clearer this game becomes.”

In addition to Hamburg, who are currently third in the second division (57 points, plus 31 goals, away in Rostock), there are two other clubs in the lower house in the running for promotion after Schalke 04 have already made the Bundesliga return perfect: second-placed Bremen (60 points, home game against Regensburg) still needs a point, Darmstadt (57) is level on points with HSV, but due to the goal difference of nine goals, they are currently in thankless fourth place.

In the past three years, the top favorite from Hamburg has always ended up there, which caused a lot of malice and ridicule. While the Hanseatic League always collapsed on the home stretch, this time it was exactly the opposite: After 29 match days, coach Tim Walter’s team was seven points behind in third place and had no chance, but now after four wins in a row they at least have relegation in your own hands. The euphoria on the Elbe is correspondingly high at the moment. “The whole city is electrified like never before in the House of Commons,” he wrote table football.

Whatever the outcome on Sunday afternoon, it can already be said that the Bundesliga will become much more attractive in the coming season thanks to the traditional clubs Schalke, Hertha/Stuttgart and Bremen/HSV. “Renaissance of the traditional clubs” was the headline Augsburg General. In comparison, some of those responsible in the DFL, Bundesliga, TV stations and fan associations would probably be reluctant to see the outsider Darmstadt 98 in the upper house.

The author was not only referring to Schalke, HSV or Bremen. But also on the second division promoted Magdeburg (European Cup winner 1974) and Braunschweig (German champion 1967) as well as the third Kaiserslautern (four times champion), who meets the most popular East German club Dynamo Dresden (eight times champion in the GDR) in the relegation.

And on the two leaders in the West Regional League, Rot-Weiss Essen (1955 champions) and Bundesliga founding member Preußen Münster, who had the same number of points before the last matchday. While Münster fell back after the first year, RWE was first class for a total of seven years. However, the last Bundesliga relegation was 45 years ago, after which top scorer Horst Hrubesch joined HSV together with Felix Magath from Saarbrücken.

An incident that shows the other side of the coin, as well as the sometimes uncontrolled storming of the square in recent weeks, during which, according to their own statements, a spectator was crushed by the cheering crowds at Schalke and feared for his life. Not to mention death and violence threats from alleged fans in the recent past, for example at Hertha BSC or in the previous year after Schalke’s relegation.

The force that traditional clubs can develop can also have a destructive effect. Not only in the ranks, but also in the management levels, where busybodies, bluffers and imposters have repeatedly led glorious clubs to ruin.

Ultimately, what matters is the pitch, and that applies to both large and supposedly small teams. And especially when it comes to the alleged favorites, many professionals often cannot cope with the pressure. HSV has been an example of this in recent years, which is why Darmstadt 98 still has every chance of promotion, regardless of all sympathies or antipathies.