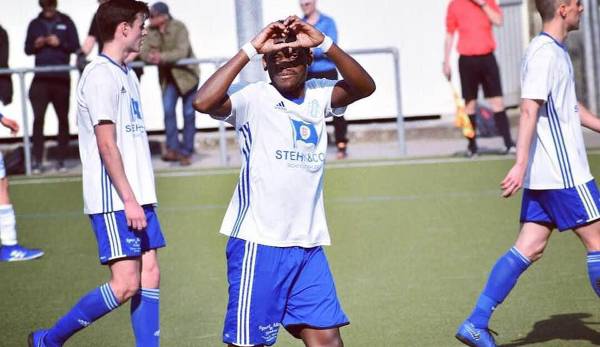 Borel Moukoko is the older brother of Youssoufa, who became the youngest player in Bundesliga history at Borussia Dortmund. The 20-year-old is also a footballer and is trying to gain a foothold in the professional field.

In an interview with SPOX and goal Moukoko speaks about his family’s life in Cameroon and the start in Germany.

He also comments on his previous positions in German football and explains how his brother Youssoufa dealt with the early hype surrounding him.

Mr Moukoko, we know from your brother Youssoufa that he came to Germany with his father and mother in October 2014. Her father has lived in Hamburg-Harburg as a German citizen since the 1990s. When exactly did you come to Germany?

Borel Moukoko: On December 1st, 2016, I was 16 years old. I flew here with my father, my birth mother stayed in Cameroon. Youssoufa and I have different mothers, but the same father.

Moukoko: He tried to find work here. At the beginning it was of course completely unclear to him how everything was going in Europe. Like many foreigners who go to a foreign country, he had to struggle a lot to make friends. He later did the German Abitur, then studied and worked as an engineer and mechanic. Sometimes he preferred to work instead of sleep. Just to give us the chance one day to have a better future. What we are we are thanks to him.

How did you make the decision to come to Germany?

Moukoko: Basically, my father fought for it for two years and organized everything necessary so that I could follow suit. I made my decision because I see my future in football. I want to become a professional like any footballer. Football has always been my great passion. But to put it on a more professional footing, it was clear that I had to come to Europe for it. The football training here is much better than in Cameroon.

What was your everyday life like in Cameroon and what role did football play in your life there?

Moukoko: Not really. I loved to watch Barcelona, ​​Real, Liverpool and Bayern and see how the players behave so that I learn as much as possible from them. Youssoufa has always been into Lionel Messi above all else. We also often watched the games from the top European leagues or the Champions League together. That was always wonderful. In Africa it is seldom that people sit alone at home in front of the television and watch football. Most of them go to a bar and then watch together. 100 people come together for top games in the Champions League. You don’t have to order something, you can just sit there and watch the game. When a goal is scored, many people freak out and are happy for the clubs that support them.

Moukoko: I didn’t have any problems with that. I thought it was great when I saw snow for the first time. Overall, I was and still am very satisfied that I can be with my father and brother. I didn’t care about the changed climate and didn’t prevent me from playing football. When I arrived, I first attended a regular German course for six months. The language wasn’t easy for me at first, but it quickly worked out better – we are also doing the interview in German. (laughs) Then I started eighth grade in a secondary school. When I was 18 at some point, however, I realized: in order to achieve my goal and become a professional footballer, I have to really accelerate right now.

Youssoufa started at FC St. Pauli relatively quickly after moving to Germany. How was it with you?

Moukoko: Just like that. For a week I had a trial session with the U17s in St. Pauli under Timo Schultz, who is now the head coach of the professionals. He said I did very well and a decent level. He wanted to keep me too, but the prospect of regular playing time wasn’t there. But my father said I had to play right away in order to get ahead. Schultz then put me in touch with his current assistant coach Loic Fave, who was then training the U17s at Eimsbüttel TV.