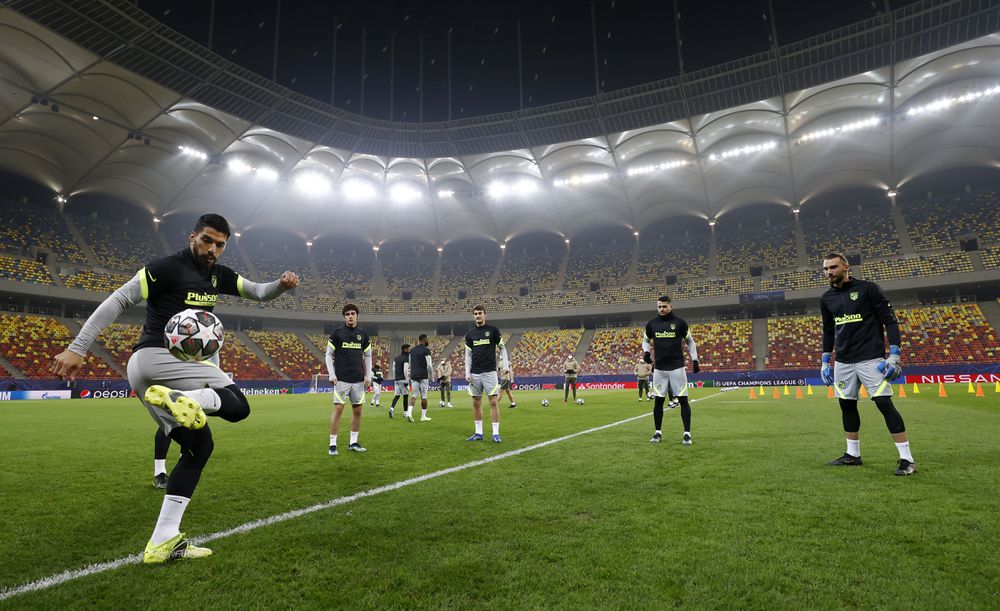 “We play at home!” Diego Pablo Simeone proclaimed with irony in the press room of the Bucharest National Stadium, where this Tuesday (9:00 pm, Movistar Champions League), Atlético and Chelsea meet in the first leg of the round of 16 Champions League final. The impossibility for flights from the United Kingdom to land on Spanish soil has led the duel to the Romanian capital. Since it was learned that the match could not be played in Madrid, the message from the coach and the dressing room has been uniform about this forced exile. “You don’t have to spend your strength or energy on something that doesn’t depend on us,” Savic said. Afterwards, Simeone supported the Montenegrin defender’s words, although he did not deny the discomfort of the displacement. “We have traveled four hours and Chelsea six.” Only the final value of away goals in the event of a draw breaks the neutral field feeling that surrounds the match.

On stage tonight, in May 2012, Simeone began his collection of titles as rojiblanco coach by winning the Europa League against Athletic de Marcelo Bielsa (3-0). Only the coach himself and Koke survive from that team, who at that time was a pipiolo who was just another fan, scarf on his forehead, in celebration. Eight years later, growth under the direction of the Argentine coach allows Atlético de Madrid to look at Chelsea’s face without complexes. Nothing to do with the semi-finals of 2014, when the rojiblancos went through Europe wearing sheepskin against rivals who surpassed them in budget and quality.

If not for the two slips against Levante and a surprising, unusual, defensive weakness accentuated in recent games, Atlético would have appeared at this event as a clear favorite against the English team. A team in full reconstruction after the dismissal of Frank Lampard and the arrival of German Thomas Tuchel. The losses of Trippier, due to suspension, and Vrasljko, due to injury, have left Simeone without natural right backs. It does not seem that the youth squad Ricard is going to be the game in a game of this kind. Marcos Llorente is once again a candidate to occupy a position in which he loses offensive presence, something his own coach admits: “Marcos gives us a lot everywhere. I am the first to appreciate that he gives us a lot at the top, but of the players I have, he is the one who best occupies that position ”. On the other side, with Carrasco also absent due to a blow, Saúl competes with Lodi if Cholo maintains the drawing of the two lanes and three centrals, which are less reliable in the last section of the course. Seven consecutive games conceding at least one goal for a total of nine. “We are a team that can change the drawing during the game, go from a defense of three centrals to a line of four. With the system of three it is true that lately we are receiving goals, but just as when we conceded little it was a matter for everyone, now we all have to improve in the defensive phase. Defenders first, of course, and then everyone ”, confirmed Savic.

For the midfield, Koke and Lemar are fixed, with Kondogbia, in principle, to sweep behind them. The attack will be for Luis Suárez, whom Cholo clings to from his experience: “It generates hierarchy and a lot of attention in the rival.” Tuchel also focused on the Uruguayan: “At PSG we were interested in signing him this summer. He is a forward by birth. He always wants to show his desire to score, score and score ”. It remains to be seen if Simeone will accompany the Uruguayan striker with João Félix or Correa. Again, as in the quarter-finals against Leipzig in Lisbon, the coach faces the dilemma of leaving out the most talented player on the squad, and the club’s great sporting and economic commitment, in one of the most transcendent matches of the season.

In front, the reborn Chelsea that has reaped five victories and two draws since the arrival of Tuchel. “We are facing a team with a coach who has made all the teams he has been in play very well,” concluded Simeone.

The exile of Bucharest due to the restrictions that prevent the arrival of flights from the United Kingdom to Spain left Atlético with the feeling that the principle of equality was broken because the return match will be played in London, scheduled for March 17. Chelsea’s own coach, Thomas Tuchel, has admitted that Atlético has been hurt by the decision. “They are at a disadvantage for not being able to play in the Wanda Metropolitano,” acknowledged the German coach in his appearance yesterday in London. A senior official of the rojiblanca entity confirmed to this newspaper that in the negotiations to choose the venue for the meeting, the club tried to get UEFA to also move the match back to a neutral field, but denies that they continue to insist on it. The European body referred to the protocol established for the organization of parties that may be affected by covid-19.

The regulations say that the venues of the meetings will only be changed when the health situation worsens in the country of the local team. At the moment, Spain is not on the list of 33 countries that cannot schedule flights to the United Kingdom, most of them affected by the Brazilian and South African strain of the coronavirus. An increase in the spread of either of these two variants of Covid-19 in Spanish territory is what could lead to the British authorities including Spain on that black list. “Although we do not know if it is worse to travel again to Bucharest or to another country in the East, which is a four-hour flight, or to go to London, which is only two and a half hours,” they say with resignation at Atlético.